The Smoky Lake Library originated as a project of the Principal and Students of the high school in Smoky Lake from 1941.

They found a dilapidated little building where the Senior Citizens Drop-in center is now located on White Earth Street.

In 1942 the students, under the supervision of the shop teacher, built a new building. The new library was completed for a cost of $900.00 plus $150.00 for the lot. That was the home of the library for the next 20 years. That building is now at the museum site and hopefully will one day be restored.

According to Village by-law’s in 1944 - 26 electors petitioned the council of the Village praying for the establishment of a public library under the Public Libraries Act. In June of that year the Village passed a by-law and a board was appointed. A librarian was hired for an honorarium of $100.00 per year.

In the 60’s when Smoky Lake became a town it was decided to include the library in the town office building with it’s own entrance facing toward the street by the post office.

In 1981 the Board was able to expand and two rooms were combined to make one area, providing space for a children’s section and room for a table for patron use. A new checkout counter and a fairyland- type entrance were part of the renovations.

In the late 1980’s there was buzz about a regional library system in the northeast. The Town of Smoky Lake agreed to join the Northern Lights Regional Library System when it was established in the early 1990’s.

In the early 90’s the library was again squeezed for space. The Smoky Lake County had moved from their building and it was vacant. They agreed to give the building to the Library Board for use as library.

It was a huge under taking – renovating the building on a shoestring budget, and moving books. The library celebrated the grand opening of the new building in 1994.

One of the special projects we are proud of is the Health Resource Room.

In 1999 we received a grant from Lakeland Regional Health Authority and a donation from ATCO for shelving to help develop a Health Resource Room. Initially F.C.S.S and The Health Unit donated materials. These donated books coupled with the health related materials of the library and a computer with Internet access gave us an excellent collection for patrons looking for specific information on health matters in a confidential setting. The collection is constantly being expanded and updated.

When we moved into our current space, the staff began the process to work towards automation. Bar codes were added to all resources and we started using a computerized system. In November of 2000 the Library went ‘live’ and became fully automated. We share our resources with the province as a part of the TRAC consortia.

Since we have been in this building, we have done several upgrades. In 1999, we added the ramp and started using the current entranceway. In the early 2000’s, we started to notice a leaky roof. Thanks to the Town of Smoky Lake and the Smoky Lake County, we were able to qualify for a grant to repair the roof and to replace the two furnaces. After we had a new roof, funds were acquired to update the circulation desk. In the fall of 2012, the Town and County again assisted financially to help with a grant to paint inside and outside, replace carpets and upgrade some furniture and window coverings. Recently, we again applied for a grant to upgrade to energy efficient lighting. With this grant, we used an estate gift from Dr Narinder Dhir to match the grant.

In 2018, we replaced all six computers (one staff and 5 public use) thanks to the financial assistance and community support from the “Kinette Club of Smoky Lake, the ‘Smoky Lake Kinsmen”, the “Smoky Lake Trail Twisters”, “Access Pipeline” , “Dr Chomay and Associates” and “Smoky Lake ATB”. 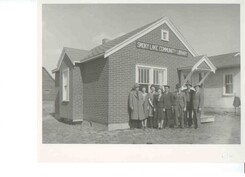 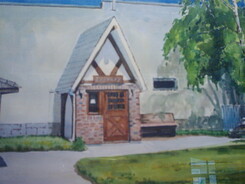